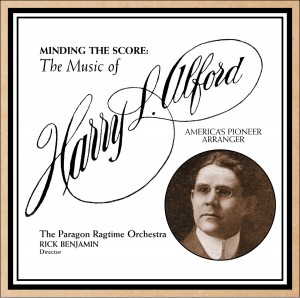 While Harry L. Alford (1875-1939) was a composer of rare talent and imagination, the creation of melodies was only of peripheral interest. Alford yearned for something quite different and new – a musical path that had not yet been blazed by anyone else: that of expert sound-sculptor, ensconced in a modern office, sophisticated yet keenly attuned to the popular, working exclusively as an “arranger of music.”

In the 1890s, when Harry Alford formed this ambition, no such profession yet existed. His vision of a large-scale independent bureau serving publishers, producers, theatrical stars, conductors, composers, and songwriters with ingenious, instantaneous, made-to-order musical arrangements had no precedent. Yet Alford’s execution of this dream succeeded beyond anyone’s expectations, resulting in over thirty thousand scores which formed a repertoire played by virtually every American band and orchestra and heard by millions.

Harry Alford arrangements were commissioned by almost all of the nation’s music publishers and his songwriter and composer clients formed a virtual “who’s who” of American popular music of the early twentieth century. Dozens of the biggest hits of the 1900s, 1910s and ’20s were first introduced to the public as “clothed” by Harry Alford. At the same time Vaudeville was America’s leading form of entertainment, and during its “Golden Age” Alford was the composer/arranger of choice for every top vaude act.

Harry L. Alford’s influence on American music was powerful, not only because of his massive output, but through his innovations. His distinctive “chromatic counterpoint,” promotion of the brass and woodwind instruments as absolute equals of the strings, and brilliantly conceived percussion writing stood America on its ear. And through his once widely celebrated achievements, “arranging” came to be a recognized and a highly respected branch of the musical arts. The eighteen selections heard on this recording were written between the years 1905 to 1925, the twenty-year period that offers the best overview of Alford’s influence and artistic legacy.

Produced by multi-Grammy Award winning “Classical Producer of the Year” Judith Sherman, MINDING THE SCORE is a joyful discovery one of the true unsung “Founding Fathers” of American pop music.