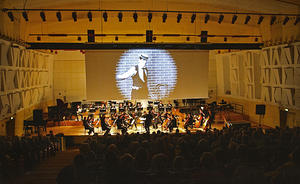 Having conducted orchestras for more than 700 silent film screenings across the U.S. and Europe, Rick Benjamin is the leading expert in the field, and the last of the real “Movie Palace Maestros.” Now, let him help your orchestra enter or further explore this incredible world of musical and visual artistry. Rick’s collection of historic silent film scores is legendary (more than 900 titles), his film library formidable, and his ability to curate, host, and conduct film-with-orchestra events second to none. Audiences love it!

THE CLOWN PRINCES - Short comedies, packaged in a set of three, mixed and matched:

Charlie Chaplin: The Pawnshop, Easy Street, The Adventurer, The Rink, Behind the Screen, One AM, The Immigrant, and Easy Street.

Buster Keaton: The Blacksmith, Cops, The Playhouse, The High Sign, The Haunted House, and One Week.

Harold Lloyd: Never Weaken, Get Out and Get Under, Haunted Spooks, and High and Dizzy.

A Dog's Life (Charlie Chaplin, 1918) - The Tramp adopts an adorable stray dog - "Scraps" - and the pair embark on a series of hilarious adventures in the bustling city.

The Kid (Charles Chaplin, 1921) – The Tramp adopts an abandoned child, and the two set off on a series of adventures. Sweet and funny, with touches of high drama.

The Night Before Christmas (1906) – also from Edison’s Laboratory; one of Santa's first film apperances. Learn more about presenting silent cinema: Call or write for your free copy of Rick’s new album The Pioneers of Movie Music or his DVD of the world’s first action/adventure film, THE MARK OF ZORRO with its original 1920 orchestra score!