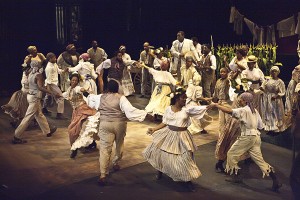 The Ring Dance from Act I of Scott Joplin's "Treemonisha," reconstructed and conducted by Rick Benjamin.

Scott Joplin's 1911 Afro-American opera snaps to life in Rick Benjamin's reconstruction, acclaimed by audiences and major U.S. and European critics. This unique work is offered with Mr. Benjamin conducting his orchestrations in concert as well for semi- or fully-staged productions.

“Treemonisha as It Was Intended to Be” (headline)

“…sweetly foursquare arias (Joplin’s libretto is touching and earnest) alternate with choruses that could make you weep with joy. There is nothing else like it, and Benjamin, aided by his excellent orchestra and singers, has finally made it whole.”