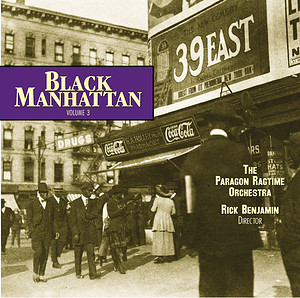 Featuring the world premiere recording of the original 1900 score of “Lift Every Voice and Sing!”

“This is the third volume of Paragon Ragtime Orchestra recordings documenting the music of important African-American composers from late 19th- and early 20th-century New York City. The inspiration for this effort came about twenty-five years ago, when I read James Weldon Johnson’s Black Manhattan (1930), a fascinating chronicle of the city’s black artistic life from the Victorian era to the Harlem Renaissance. I came to Johnson’s volume after finishing Eileen Southern’s The Music of Black Americans (1971), a wider-ranging academic work, but a no less revealing one. After reading these books I was excited to listen to the music they had described. But there was a problem: remarkably few recordings existed of historic African-American music, and even fewer to represent New York’s pioneering black composers. This inability to actually experience a considerable span of our musical heritage was a void that needed to be filled. Clearly it was time for a carefully curated, new recordings of first-rate performances played from authentic scores.

Fifteen years and three PRO Black Manhattan volumes later, we have recorded three and a half hours of this previously neglected music: sixty pieces by thirty-two outstanding African-American composers, spanning the seminal years of the 1870s to the early 1920s. It is our hope that these efforts have started to close this gap in America’s cultural memory. Our even greater hope is that these recordings will enable the world to rediscover this magnificent music and the gifted, spirited, and persevering people who gave it to us.”

Produced by multi-Grammy Award winning “Classical Producer of the Year” Judith Sherman, this album is an extraordinary voyage of discovery for everyone interested in American music.